In this the 2nd week I answered Jess Alexanders task of posting an image or other work of art that illustrated the way in which I worked – my own Position and Practice. My initial instinct was to post an image by Ansel Adams. However, on my 2nd reading of the task I noticed that it specifically said to post a Non-photographic item – I had made a mistake. The reason for my own mistake relates to my being dyslexic. However, this goes to I think one of the principle issues raised thus far within Jess’s talk as well in that illustrated with this weeks reading examples in that of interpretation.

No two individuals as far as we can tell perceive the world around them in the same way. We can describe some thing and agree a common understanding and frame of reference and we may have an accurate or good enough match so that we can agree on some thing but again in the longer term, the item may mean different things and cause differing memory associations.

In Eugenics Without Borders we have a study of images shoot for the specific purpose of cataloguing and typing a persons features and then using those images to abstracted a particular meaning from those images. Within this book Dr Jean-Martin Charcot at La Salpetriere in the 1880 tried to prove a correlation between intelligence and skull size. It is fair to say that the basic concepts behind  Eugenics are valid and have been applied to the breeding of plants and animals. However, whilst it is possible to breed to reinforce one feature and remove others with any species it is a mistake to take this as a general argument to be applied against mankind. In trying to breed say to illuminate my own weakness of say dyslexic we may well as an unfortunate side effect get rid of all the complex problem solves. In short humanity succeeds not because we good or bad at any particular thing but that we as a species are generalists. So yes, the eugenics movement and the application of images to that movement by the Charcot or the far right and left n the early to mid 20th century has been thoroughly discredited. So, should we discard the work of Charcot and his like ?

My answer has to be no in that the work of Charcot provides us with a social commentary and evidence of our history. It also gives us a visual history of people, clothing and other data that can be gleamed from the images, all of which where simply not relevant to Charcot. So in this we in our modern views have re-interpreted and reused media.

One of my reasons for undertaking this course is to get me out there taking photos and thinking. I principle work in one of two differing directions – General Landscape and Aviation and Means of Travel.

Within both my two main streams, I try and reproduce in my final image what I see before me when I take my phone. Okay, the catch though is that when we fame a scene and take a photo with a camera with a specific lens setting and other environmental aspects the camera will record an image has it has been instructed in accordance with the technology involved. When we look at that same view using a human eye we are not registering the image as projected onto the back of the eye. Rather we a re looking at the brains interpretation of an image. The simplest example of this is that I can take a landscape image and the sky will appear lighter than it is as I perceive it. So, a lot of landscape photographers will use a filter over the lens to darken the sky; else create and blend image or otherwise manipulate an image during the development process. The aim of the manipulation is to darken the sky to reproduce what we think we see. OR at least this is the way in which I try and work.

In my landscape work my images may contain a generic cluttered landscape and or may feature an item, object or subject to which I wish to draw attention to. But I do not always screed in this endeavour. Whereas, in say taking a photograph of a flying aircraft the subject matter of the image can be restricted. What I am aiming for as a result of this course is to combine my two differing streams so that I can produce a fie art landscape by which I can more accurately draw the viewer to what I want to show them.

In getting out to take some photos for this weeks tutorial assignment on Friday the 5th of October 2018 I took some inspiration from Outdoor Photography Magazine. Issue 236 features an article by Laurie Cambell a wildlife and nature photographer on the Japanese practice of Shinrin-Yoka;- “Forest Bath”. Okay, its Autumn I live on the edge of Leicester and I like to visit a local managed woodland called Swithland Wood. Swithland is a part of Charnwood Forest and is owned and managed as part of the Bradgate Park Deer Park Estate the former home to the Grey family.

Note: Lady Jane Gray was the Queen of England for a few days beforee Elisibath the 1st .... 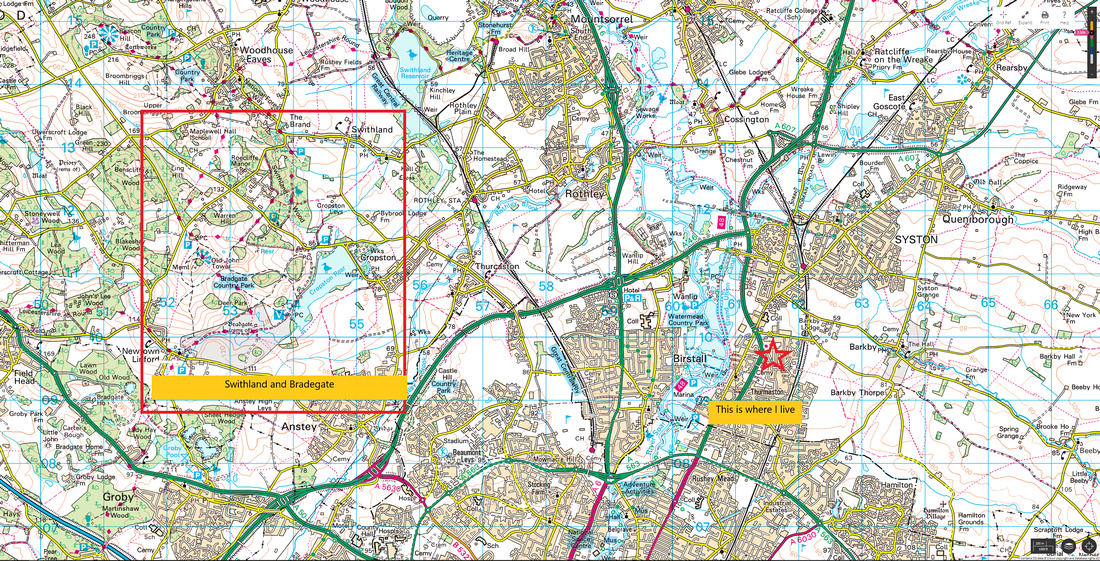 This public access woodland and a place I visit a couple of times a year. Wanting to work as I did on a nice sunny day with shafts of light through the trees I used Sigma Art 14, 35 and 50mm lenses fitted to a Canon 5D MKIV DSL camera. At the start of my walk I had no particular target in mind for my image and took a series of general photos within the woods. As nice as this was my aim is to move to the fine art category and I started to look for form and texture of a particular scene. Any way io took my photos and on getting home I loaded RAW image on my computer, processed the images in terms of noise and sharpening as well as deleting a small number of images. The aim was as I keep saying to show the viewer what I saw or envisioned in the woods sing Adobe Lightroom and my memory.

I present two of my images at a Web conference on Friday and an aspect I had simply failed to notice was spotted straight away by others. My photos as I showed had a “Blue Cast” as they had been shoot with an incorrect colour temp. DSLR’s can normally “Automatically” work out the colour temperature and vary it as needed unlike older film stock which will have a very deliberately fixed colour temp – even black and white film. As I say my intention was accurate reproduction, in failing to do this the tutor within our group and other group members started to read in different interpretations from my original ones. 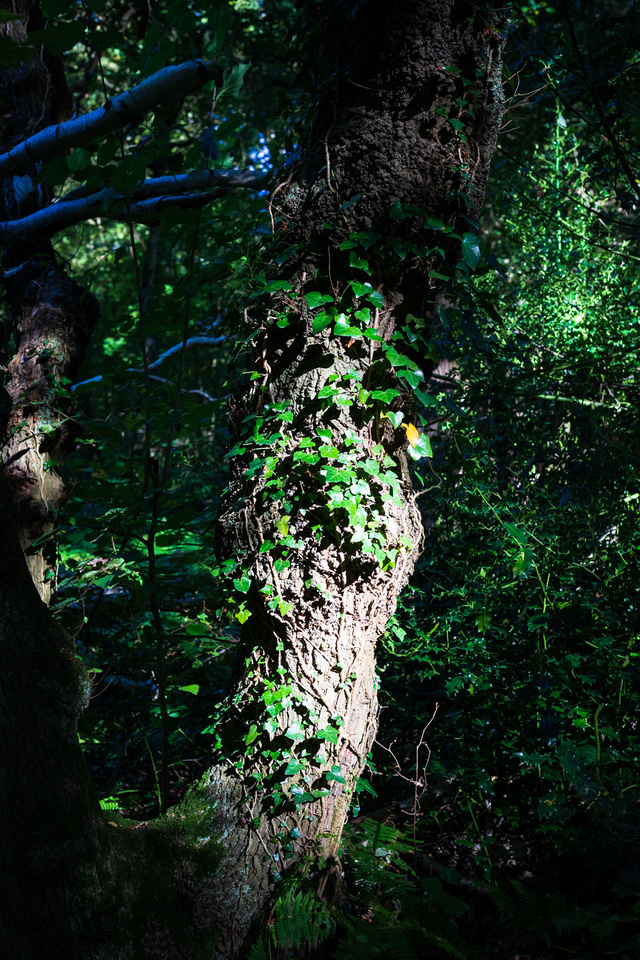 As I say this is not the way I work – but the error in colour balance has illustrated to my self the point of this module as to the way I work PLUS the fact that different people see different things in images. 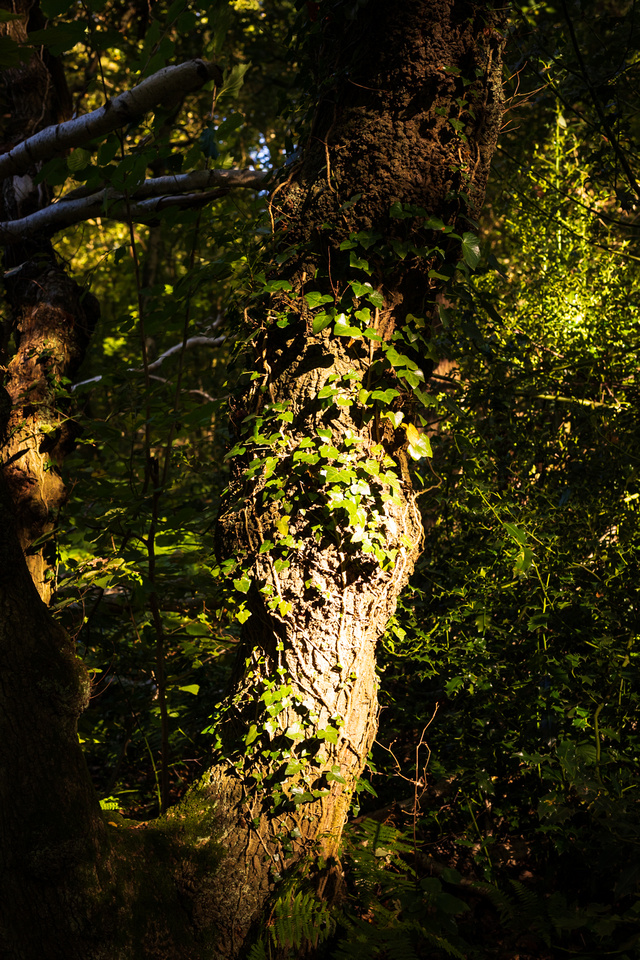